Between land and sea, in the neighbourhood of Saint-Tropez Saint-Tropez, there are treasures to be discovered! 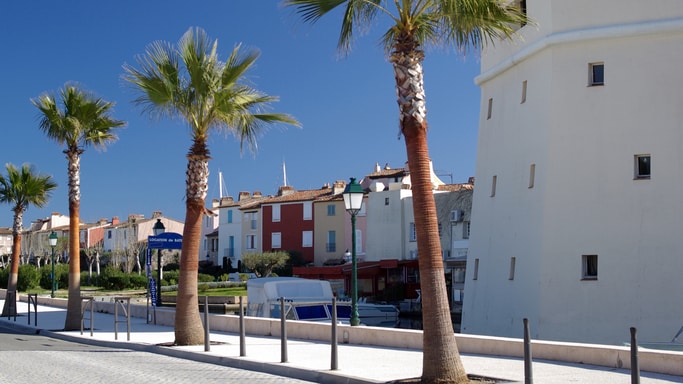 Saint-Tropez is one of the villages that provides a luxuriant relaxant and stimulation, as an outlet for the mind and body that most would appreciate within healthy needs. The place also continues to generate healthy fantasy in the imagination of French and foreign tourists.

At the mere mention of its name, a luxurious setting comes to mind and a hectic nightlife, the jet set and luxury yachts, are all just as attractive as the wild landscapes of the gulf and the peninsula of Saint-Tropez; only a few kilometers from the village are closely guarded treasures that you can discover, today!

The village of Grimaud is a stark contrast to Saint-Tropez with its lakeside city, facing modernity. The tower of the castle, and the preserved heritage of the village, offer a journey of choice. A beautiful landscape and mountainside are found when nearing the old village, which offers typically cobbled streets. Its houses are, with doors framed by black lava, art galleries and a beautiful Romanesque church, are part of the setting.

At the foot of the village is the lake city of Port Grimaud, which was designed by architect François Spoerry, in 1966. The houses that line the canals are private property, but it is good to walk under the arches bordering the water. The atmosphere is soft and quiet, thanks to the absence of cars. Venetian bridges connect the different islands of the lake village, hence

The Hyères islands are aptly nicknamed the Golden Isles, as they are a treasure not to be missed in the Var. Between them, Porquerolles, Port Cros and Ile du Levant, offer idyllic and unspoiled landscapes.

A very mild and sunny climate, sandy beaches and coves with turquoise waters lost in the pine forest, form an enchanting cocktail! Each of the three islands has its own character.

Porquerolles is the closest island to the peninsula of Giens. It extends over 7 km and is just a few minutes away by boat. The island has been inhabited since the 1820s and is today the most populated, and most visited, island of gold! Vineyards stretch for over 200 hectares and are home to three very famous wineries. The island of Porquerolles has remained private and takes care of its environment, as evidenced by the Botanical Conservatory and the National Park of Port Cros. The village itself is just lovely, with lush vegetation. The island was first explored by pedal power and the north sandy beaches and southern steep cliffs, overlooking the sea.

Island Port-Cros is located between Porquerolles and Ile du Levant. It is the smallest of the three islands, being only 4 km long and 3 km wide. Originally, the island was intended to defend the French coast, as evidenced by the strong five forts still visible. The oldest was built by François1st One fort is visitable, Fort Estissac, which was built in 1635 under Richelieu’s pulse. Today, the entire island is a National Park, where a building is prohibited for more than 50 years. It is the meeting place for nature lovers. Here you can observe rare species such as the booted eagle, peregrine falcon or the Mediterranean shearwater. Only a small church, and houses of fishermen, occupy Port-Cros.

The island of Levant, meanwhile, consists of a rocky ridge of 8 km long by only 1 km wide. It takes its name from its geographical position among its neighbours: the most eastern side, of the rising sun. The island was occupied in the twelfth century by Cistercian monks. It still remains a military base because of its strategic position, a small part of its surface is open to visitors. But beware, the Levant island is primarily a naturist destination, one of the most renowned of the Mediterranean, with its village shops and chapel. The ecological wealth of the island, its hidden paths in the pine forest and its cliffs, are to discover. The field of Arbutus is a nature reserve of 20 hectares and the area is full of the scent of strawberry, rosemary, myrtle, and cistus; which abound there.

Bormes-les-Mimosas is a village perched on a hill, facing the Golden Islands and at the foot of the Maures. The medieval village is one of the most admirable of the Var, with a heritage dating back to the twelfth century. The steep streets and old houses are a delight for lovers of old stone, who can also enjoy strolling to the random plots of fountains. The castle of the Lords overlooking the village; it was built by the counts of Provence in the thirteenth century. The path to the castle climbs hard, but once arrived at its esplanade, the spectacular view of the Golden Islands will reward you for your efforts.

The town of Bormes-les-Mimosas houses the famous fort of an official presidential residence, perched on a rocky outcrop. Therefore, in the summer months, it is not unusual to see the President of the French Republic in the village streets or at the office, in the church of the eighteenth century. You can visit the fort Brégançon but a reservation is given as security measures are needed for these places.

The number nine and these small villages are perched on their incredible hills. Fayence, Bagnols-en-Forêt, Callian, Mons, Montauroux, Tourrettes, Saint-Paul-en-Forêt, Seillans and Tanneron. Their most outstanding feature is their shape! From the sky, they look like a snail’s shell, and their dwellings are constructed in a spiral around their castle or their church. This is especially true in Callian, where one can still see the castle of the twelfth century.

The town of Mons is the highest of the nine villages, perched 814 meters above sea level. From the village square, you can admire a breathtaking view of the whole area, from where you can even see the sea! The twelfth-century church still watches over the village and from there, you can also admire dolmens and remains of the aqueduct linking Mons to Fréjus.

The most famous of the nine villages is probably Fayence. The town’s origins date back to the tenth century. The clock tower dominates the village and from the top, you have an amazing 360° view of the entire region. The streets are full of the old world charm of traditional Provence, and many small shops offer ceramic objects made in nearby villages. A note for thrill seekers is that Fayence has a major center for accommodating flight to sail. Thanks to the peculiar configuration of the hills, overlooking the sea, thermals are most suitable to discover these ´glider` regions.

Lake Saint Cassian is in the valley at the foot of the villages. It was created following the construction of a dam in 1966 and provides the Var water supply and part of the Maritime Alps. It is good to bathe there in the summer and many activities are organized around it. Full of fish, Lake Saint Cassian is renowned for its huge carp!