Region in the spotlight: Murcia 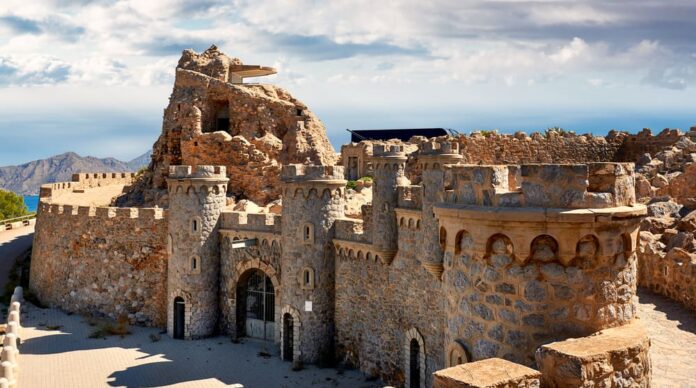 Spain has many regions famous worldwide and sweet for tourists, yet there are some that are undeservedly overlooked. One of such regions is located on the south-east coast, and it’s called Murcia. The region is a combination of wide plains and mighty hills and mountains washed by the Mediterranean Sea. The slow pace of life under the sun that shines bright here for over 300 days a year makes Murcia a perfect place for laid-back leisure. Warm sea, remarkable local cuisine, and rich heritage charms every visitor and stays long in their memory as a delightful aftertaste. 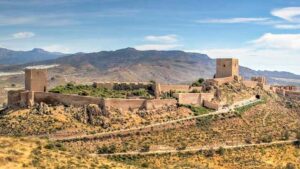 Murcia has had a rather turbulent history. For many years, these lands were a sight of clashes between the two worlds of different beliefs, Christianity and Islam. These tensions left various fascinating attractions scattered across Murcia and lay the foundation for its prime cities. The region is riddled with magnificent castles, among which the most famous are Castle of Lorca and Castillo of San Juan de las Aguilas. Beside numerous castles, Murcia region is the home to a holy city Caravaca de la Cruz. Also known as Caravaca, the city boasts perfectly preserved medieval architecture.

Murcia region is stretched across 250 km of the seashore, which equals 250 km of mesmerizing beaches. However, the pearl of Murcia seacoast is Mar Menor. The largest lagoon in Spain, Mar Menor, is a salt-water inland sea located near Cartagena. 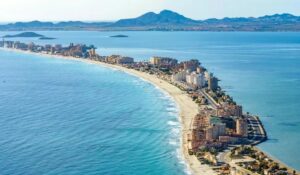 Its waters are separated from the Mediterranean Sea by La Manga, which means “the sleeve”. Aside from its ecological importance, Mar Menor is also known as a place for various types of entertainment. It is a perfect destination for a family beach vacation, since the waters there are relatively shallow and the sea’s overall salinity levels keep even the inexperienced swimmers above the surface. At the same time, its calm waters make it an outstanding location for water-related sports such as kite surfing, paddling etc. 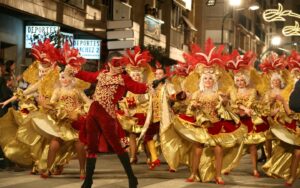 Local towns in Murcia will treat you to top-notch hospitality and incredibly delicious cuisine. Murcia has its own distinctive wines, both red and white. Nevertheless, the most peculiar attraction that Murcia features is festivals, one of which is The Águila’s Carnival. It is one of the most colorful festivals of extravagant costumes in Spain that goes on for a whole day and night.

Infrastructure Of The Murcia Region.

Murcia is commonly known as one of the overlooked regions of Spain. Yet, its tourism and overall infrastructure are rapidly developing. It is an autonomous region and its government heavily invests in infrastructure. Right now there is a vast network of highways, including the ones alongside the shore. It takes only 4 hours now to drive from Spain’s capital to Murcia, the capital of the region. 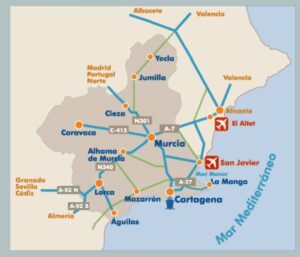 According to the region’s development plan, Murcia is anticipated to join the high-speed railway system in 2021. As for flight connections, the region got a new airport back in 2019 which serves a destination across the EU, and as a bonus, it hosts flights to Palma de Mallorca. Murcia is mostly an agricultural region, its rural area is focused on producing fruits and vegetables. Murcia is also known for its beautiful flowers farms. The only port of Murcia is located in Cartagena. In the 2000s, the region got a second breath as a tourist destination, and now it brings a sizable contribution to the region’s economy. One of the biggest issues for Murcia is freshwater supplies since it’s a very dry region and water is being delivered to Segura from Tagus river through a special hydraulic structure.

While the real estate market in the Murcia region is relatively following trends of general Spanish market, it still can propose some sweet deals. As for the end of 2020, a square meter in Murcia cost around €920. This is almost 30% cheaper than the average price in the whole country. The peak of prices on real estate in Spain was back in 2007, since then price tags kept loosing numbers. However, this trend might not stick around for the region for long. The pandemic of 2020 brought on harsh times for the tourism sector, low tourist flow influenced negatively the demand for housing and as a result, some homeowners got property they can’t afford anymore. And the most obvious outcome for this is that they’re going to sell it and sell it fast. However, soon the tourism field will start to recover and such hidden gems as Murcia will be soon discovered and grow in popularity.

Whether you are looking for a perfect getaway destination for your family or something to invest into, Murcia should be on your radar. Beautiful pristine nature, hospitable people and a long, tempting seashore make it a great place to have a second house.

A beautiful house in Spain has caught your eye? You want to buy it from abroad? Then request a quote for a mortgage here: within one working day in your email inbox.

Intending to buy a house in Spain for your holidays or as investment? Ask your mortgage calculation without any obligation here: within one working day you will know what your options are for buying a house in Spain.