Saint-Tropez …. the myth of the French Riviera! 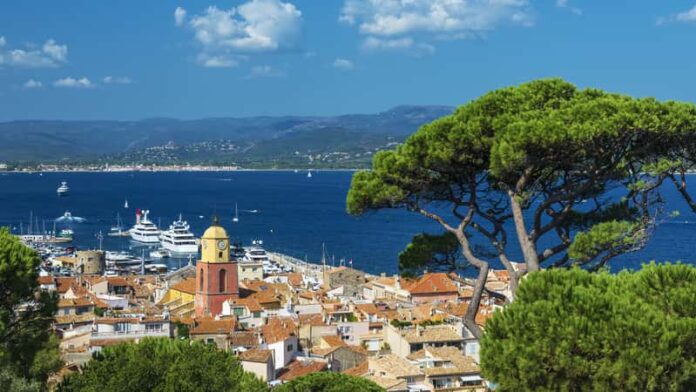 More than a tourist destination, Saint-Tropez is a true international myth. This small village in the Var has become a symbol of the French Riviera that represents dream beaches, parties, yachts and also authenticity and relaxed living. Saint-Tropez, is transformed from a fishing village during some summer weeks, to become the appointment of the jet set, lovers of its sandy beaches and vacationists, yet it is even more than that.

At the end of the nineteenth century, Saint-Tropez began to attract fine artists. Painters, writers, and filmmakers were all inspired by this pretty village. Famous painters like Matisse, Signac, and Marquet, were all inspired here and created some of the finest works of pointillism and fauvism. Boris Vian and Colette have also taken advantage of this unique atmosphere, but it is the cinema that can declare its most ardent flame in Saint-Tropez, with its inescapable icon Brigitte Bardot, who still lives in Madrague.

Saint-Tropez has even inspired some of its most talented artisans to make their fortune. This is so for the manufacturer Spartan and its brand. The Tropéziennes, is a reference for the chic and Bohemian market. There is also the swimwear designer Kiwi, who seduces visitors to Saint-Tropez with their famous “Saint- Tropez Beach Wear.”

The small port of Saint-Tropez is probably the most famous image of the village. Originally, it was a simple fishing harbor. The fishing boats are now relegated to a small area of the port, alongside the dam but only give way to an incredible show of yachts of all kinds: ultra-modern yachts, majestic and stately, smooth and sleek etc. with some so large and luxurious that they have helicopter pads on one of their bridges, offshore racing etc. ….

If you want to spend a day at sea, it is quite possible to hire a boat. The skipper will take you to the most beautiful coves of the bay. Some rental companies like Octopussy, partner with Sénéquier brewery, to offer you relaxed enjoyment and a great time at sea. You can even extend your experience by getting your boat licensed. As far as prices go, small boats can be hired for 7 people at €500 a day, but prices can easily soar to €6000 a day for a luxury, 12 passenger yachts.

To simply admire the boats glide by and absorb the fresh sea air with a view of the beautiful coastline, stop at one of the many bars and restaurants that stretch along the quay. The most famous of them is Sénéquier, a café-patisserie founded in 1887 to also become a fine brewery. Tropézienne`s real institution is that it is good to sit on the terrace to see and be seen. You will definitely come across some stars who do not derogate from that rule.

Away from the bustle, if you want to find some peace and authenticity, visit the famous Place des Lices, go bocce. In the shade of the trees, you can stroll and refresh. Every Tuesday and Saturday mornings they hold a Provence market where there are all local products for sale. Other days, vegetables, fruits and flowers are presented on the attractive Place aux Herbes, where fishermen also sell their catch of the day!

Throughout the season, Saint-Tropez is alive with numerous events. Quite simply, whenever the period of your stay, there’s always something happening there to celebrate rich and vibrant life!

Sailing fans? Do not miss the event at the beginning of October called the famous, Voiles de Saint-Tropez where nearly 4,000 skippers and owners meet to evolve in the bay with old yachts and modern boats. For a week the place is abuzz, both on the water and ashore. Other major sailing events are held throughout the season, as the Giraglia Rolex Cup or the Latin Sails.

There are also shiny, sleek machines to admire on land at Saint-Tropez. On two wheels, is the Harley-Davidson Euro Festival in June, which brings together more than 10,000 bikers or there is the four wheels of the Paradise Porsche event. This event has been held for nearly 25 years during the second weekend in October and brings together no less than 500 Porsche, including rare.

Musically, there are many appointments which would enthrall the most appreciative of music lovers. Nights Castle Moutte offer, during the first 15 days of August, a romantic atmosphere, far from the world of glitz and glitter. The greatest artists perform there with international pianists, singers of the blues and fado and even musical, theater groups.

You can also attend fashion shows, regularly organized by the Parisian haute couture, or find exceptional wines at the annual wine events.

The nights at Saint-Tropez are still alive and even unbridled. Some port cafés remain open all night and welcome party goers on their night out. Among the nightclubs that made the reputation of the city are those of the Papagayo, the VIP Room or Caves du Roy which has a cosmopolitan, international DJ and magnificent entertainment is on offer by all the clubs. In Saint-Tropez, everything for a party is present, within an atmosphere that is both warm and friendly.

If you like to go out to just relax over a good meal, then join with the gourmets of Saint-Tropez and the finest restaurants in town. Some restaurants are just exceptional, as The Wave d’Or, which was awarded 3 Michelin stars. If you are looking for traditional cuisine, go to Girelier on the harbor. Bouillabaisse, a typically Provencal dish, is the star of the menu, prepared by an inventive and traditional chef.

The beaches of Saint-Tropez are just as famous as its harbor and leafy squares. Kilometers of sandy beaches welcome summer visitors, some of which enjoy a truly unspoiled and wild nature. From May to October or even later in the year, the beaches are good to visit, in sunny Saint-Tropez.

The most tranquil and unspoiled beaches are the beaches of Salins and Moutte, but it is the beaches of Pampelonne to Ramatuelle, which impress as being of Saint-Tropez; about 5 km of sandy beach which surrounds a series of very fashionable, private beaches. They offer a more or less lively atmosphere; one can dance during the day or sunbathe in peace, and they also compete creatively to regale the guests.

Some beach restaurants are particularly well rated by food critics, as the Tropicana, which offers typical Mediterranean cuisine or the Graniers with its charming wooden terrace, facing the sea; it caters with only fresh produce from the market, without fuss and with lots of love.

With a casual style and everything you can possibly want in a beach club the legendary Club 55 had been open since it’s creation in 1955 #SaintTropez #France, https://t.co/L3xerEzqcV pic.twitter.com/1XkPn0GpQi

One of the surest values of the private beaches of Saint-Tropez is the famous Club 55, which takes its name from the year of its creation: 1955. It is essential to book in advance, but the restaurant is excellent, whilst retaining authenticity and simplicity.