Spot on a region: Rhône-Alpes 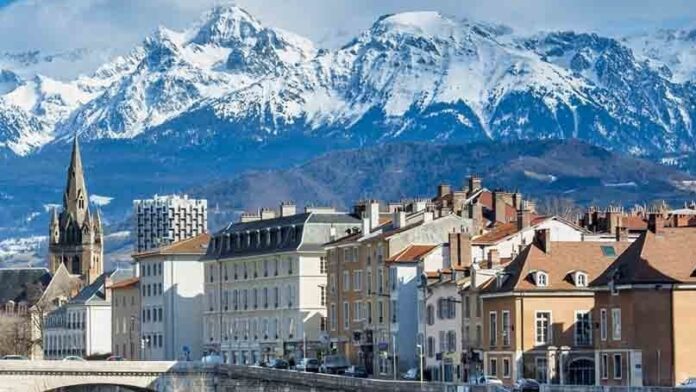 In the southeast of France, a beautiful Rhone-Alpes region is nestled between two other countries. The nature of the region is versatile, ranging from charming rural countryside to Alpine cliffs. On a journey towards the mountains, the scenic views change from busy cities and languid villages to lavender fields to borderless plains and vineyards. Fascinating landscapes are complemented by a rich gastronomic culture of exquisite cheeses and head-spinning wines. This region is bound to charm its visitors and keep them under the spell for as long as the visit lasts.

Attractions of the region

The region is comprised of 8 departments and, since 2015, one Metropolis Lyon. Every department has both its special charm and the elements of alluring air unique to the Rhone-Alpes region as a whole. Among the most popular tourist destinations, there are Tain l’Hermitage and its Côtes du Rhône vineyards, an old Alpine town on the lakeshore – Annecy, and chic resorts on the Geneva lake. Alpine part of the region boasts various attractions such as Lac du Bourget – an alpine lake of incredible beauty, and winter-sports resorts such as Chamonix.

The most famous sight of Rhone-Alpes is Mont-Blanc. Located in the east of the region, the highest peak in Europe reaches 4 808m. The valleys that surround the mountain peak form one of the 8 natural parks of the region. The other 7 parks are spread across Rhone-Alpes, including a marvelous “Pont d’Arc” rock formation over the Ardèche river and Mer de Glâce, an easy-to-reach glacier near Chamonix.

Rhone-Alpes region is one of the biggest in France. In 2015, Lyon with its second-largest metropolitan area in France became the capital city of the region. Nowadays Rhone-Alpes has the sixth-largest economy among Europian regions. It earned a high ranking thanks to its beneficial location and well-developed infrastructure. Since it borders both Switzerland and Italy, Rhone-Alpes became a European transit hub. Millions of people annually travel via local motorways for business and leisure from Scandinavia to the Mediterranean and back.

Lyon attracts a lot of travelers as a host city for several airports that serve international and domestic destinations. Besides, it is a short drive to Geneva international airport which allows travelers to have a hassle-free connection between the two airway hubs. Besides, Lyon and Paris are connected by the system of French high-speed trains called TGV. This type of railway allows traveling from the region’s capital to the country’s capital in less than 2 hours.

After WWII, the population of Rhone-Alpes as one of the wealthiest regions kept growing. In 2014, there were more than 6.5 million residents. Inhabitation density varies from lower levels in western rural parts of Ardèche and Alpine areas in the east to the more heavily populated region’s major cities. Rhone-Alpes includes 3 major French cities: Lyon, Grenoble, and Saint-Étienne. More than 3.5 million people live in the area surrounding these cities. This “triangle” forms an economic core of the region. Light, high-tech and mechanical engineering, as well as precision machining, are the biggest industries that fuel the local economy.

The next big economy contributor is, of course, tourism. Rhone-Alpes is also the #1 power supplier in France. Four nuclear centers located along the Rhone river produce more than 20% of safe and ECO-friendly energy in France.

Nov 2019. Remarkable features of the Rhone-Alpes region such as well-developed infrastructure and tourist industry make it a lucrative location for real estate ownership and rental. The real estate prices fluctuate depending on the location. For instance, if you would like to buy an apartment near Annecy in the Haute-Savoie department, plan to invest at least 3 440 €/m².

If you are looking to buy a second house we advise you to consider a traditional French chalet. A starting price for such a cozy holiday home in Alpes varies from 218 000 € to 354 800 €. Alternatively to a chalet, you might look for a farmhouse or a Pisé house – an authentic home in rural France. Obtaining such a house at the foot of the mountain will cost you at least 155 500 €.

Rhone-Alpes region is a perfect place for those who seek a balance between the modern pace of life and a quiet tempo proper for a French chalet. Thus, it will suit any needs whether you are looking for a beneficial investment or a place to spend unforgettable holidays with your family.